Weddings and Other Slippery Slopes

﻿﻿
﻿ ﻿ ﻿﻿ I borrowed the title of this post from my daughter, Melinda.  She once wrote a blog entry entitled, "Birthdays and Other Slippery Slopes," detailing the emotional roller coaster of  family celebrations.

I've  thought of Melinda's blog post title often these past few months as we navigated the "slippery slopes" of the joyful but stressful days just prior to the wedding of our son and beautiful daughter-in-law, Jonathan and Nicole.  I was so worried about Mom because, for reasons not fully understood, holidays and other special occasions are often a catalyst for a downward turn in functioning for dementia patients. Emotion, especially emotion that recalls other very sad or very happy times, does a number on the Alzheimer diseased brain.

Mom was diagnosed with Alzheimer's just a month after Melinda and her husband, Brian, were married seven years ago.  During the busy days preceding that wedding, Mom's dementia symptoms became more pronounced.On the day of the wedding she needed my aunt's help in order to style her hair and to make it to the wedding on time.  Melinda and Brian were married in March, and Mom moved in with us in early November of that same year.  She was no longer able to stand the stress and confusion of living by herself.  I've always felt that the emotions surrounding Melinda's wedding somehow triggered Mom's transition from mild dementia into the early/mid-stages of Alzheimer's.

And so I was vigilant to be protective of Mom as this latest celebration approached.  I shielded her as much as possible from the hoopla surrounding this exciting, beautiful, emotional event, and felt trepidation on the day of the wedding as Mom fielded three separate caregivers who arrived at designated times to serve her a meal, fix her hair, and help her dress. 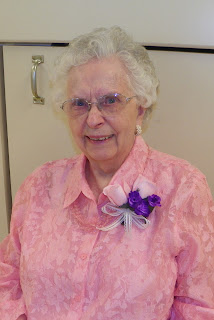 She was cheerful and good natured.  She joked.  She smiled.  She seemed to enjoy the proceedings.  We brought her to the church for the three hours preceding the wedding and she smiled for many photos and apparently loved interacting with the bride and groom as they greeted her and coaxed her to her feet for a series of formal photos.

Alzheimer's disease can't be charted or predicted with perfect accuracy, and the course of the disease varies greatly from one individual to the next.  The past seven years have brought Mom improvements in nutrition, weight, and medication.  These things, in combination with a comfortable, generally predictable environment where she feels secure, have evidently combined to afford Mom the capacity to cope with the slippery slope of a wedding celebration.

I am afraid of her next downward turn.  I am so grateful that Jon and Nic's wedding did not trigger that much dreaded transition.

Here are a few more photos of the wedding: