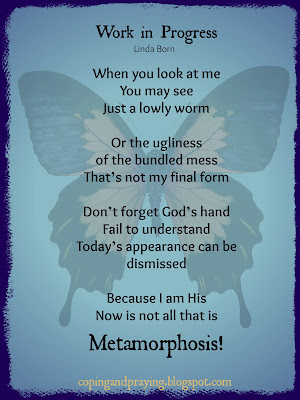 Most of us spend a tremendous amount of energy constructing and maintaining our personae. I'm talking about outward appearances: lawns that are mown, cars that are washed, clothing and hairstyles that are, if not fashionable, at least clean and acceptable. We follow rules set down for us by the culture in which we live, and fall to self-condemnation when we begin to drown in the overwhelm of our impossibly ambitious lists of endeavors.

A depressing number of conditions can cause our carefully constructed veneers to erode. Sickness can do it; any determination to "be nice" quickly falls away when our bodies are in pain. If we've maintained our exteriors at the expense of our spirits, it's worse, because all the vexations that we've secretly harbored toward others--those things we've bypassed through strength of determination to appear kind or Christian--quickly boil to the surface. We lose the ability to contain irritation. Sickness, old age, or physical pain peel away an outward mask of good appearances.

There is a misconception that Christians ought to be exempt from such petty, human vices as irritability or venting of negative emotions, regardless of difficult circumstances. A few days ago, my mother was angry with her caregivers at the nursing home, and, utilizing the only effective weapon she has left, was criticizing every person who had the misfortune to have been assigned duties on her behalf. Mom is still able to use words as barbs, and her young caregivers received the hurt. One of them rolled her eyes heavenward and said, "And she's supposed to be so religious!" I was stung, because I could see the enemy at work, undermining the Lord's transforming power in my mother's life.


The idea Satan wants to put forth is this: "What's the good of a religion that doesn't make you nice?" This marginalizes the miracle of salvation; deliverance through Christ does not make us instantly nice; it makes us instantly saved. Through Jesus we are exempted from the terrible penalty we would otherwise suffer for all eternity because of sin that goes well beyond the parameters of being merely "not nice."

We are a broken people. We are sinful, but when we accept the cleansing blood of Jesus Christ, we become children of God. From that moment forward (and perhaps, because of prevenient grace, even before) He begins to form and sculpt us according to His will. We aren't yet whole but we are being made whole. We aren't perfect but we are being perfected. One of the enemy’s strategies against us is to point out our remaining imperfections and say, “Oh my, how can that person say he is a Christian when he acts like that?”  It is no more appropriate to refer to a Christian's sins and say that because of them, that person is not a Christian, than it is to point to a partially melted ice cube on a sidewalk on a 99° day and say, "It's not water because there's still some remaining ice." Once we place ourselves in the path of God's healing light and love, his work begins. Sin that remains is melting away.

The enemy knows his time to condemn is limited. His only recourse is to point out the rapidly diminishing block of sin that remains and attempt to use it as evidence that no transformation has begun. I want to say to my mother's new caregivers, "Take a closer look. She sins with her words, but even in her current state--elderly, brain-damaged and nearly blind--the Holy Spirit is at work in her heart. The next time you go into her room she will say, "Thank you for all you do for me," or "I love you." And in her prayers she often says, fervently, "Lord help me speak and act as you want me to do. Forgive me when I don't."

My mother isn't yet perfect but she is, even at age 92 and 12 years into her journey through Alzheimer's, still being perfected by the Holy Spirit's power within her. I pray for her caregivers understanding that evidence of remaining sin does not negate the work of God in her life.