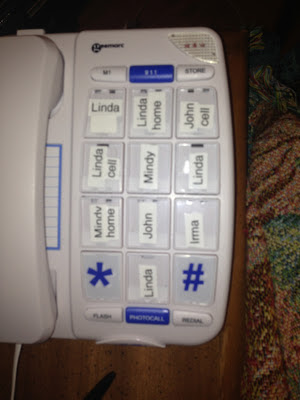 Yesterday afternoon I returned home from an errand and tossed my purse into a chair by the kitchen table. I had a writing project to complete, and a quick check of the clock told me I had about thirty minutes before my mother would expect her supper to be served. I hurried upstairs to my computer, inadvertently leaving purse and cell phone behind.  While I was working I could hear Mom's voice on the monitor and assumed she was talking to the cat.

I worked diligently for a half an hour, then hurried downstairs.  I remembered my phone, and while Mom's supper was heating I saw that she had tried to call me three times in that thirty minute period that I'd been upstairs.  I took her plate to her and though she was grouchy, she was happy to see the food.  I put my phone in my pocket and went back to work on my project.

A few minutes later a police car pulled into the driveway.  I hurried to the door.  The officer said there had been a 911 call from our address and said he needed to speak to Anna.  I took him into Mom's sunny apartment, and there she sat, her empty supper plate beside her, music wafting in the background, the cat asleep on her lap.

"Ma'am, you reported that you were being neglected," he said.

And regardless of the fact that her only daughter appeared in danger of being hauled off to jail by a uniformed police officer (and even though his enormously tall colleague came galloping through the door unannounced in the midst of the conversation), Mom drew herself up righteously and said, "Well I DO feel neglected."

I said, "MOM!  You called the POLICE on me!!"  When she looked at my face her attitude changed but only slightly.

There were apologies all around, an admonition from the policeman and his colleague  not to leave my cell phone behind again, and they left.

When I listened to my phone messages it became apparent that Mom had not called the police from confusion or emotional upset, but out of a vindictive desire to hurt me.  In the first two messages she had asked for a box of crackers to eat with her diet coke.  The third message said, "Linda, I am thinking of how I can annoy you the most.  I am going to call 911 and report elder abuse."  And she did.

This dealt me a heart hurt as deep as any I've received during these eight years of caregiving. My son told me I couldn't take it personally, that it was the disease.  "Yes, Son, I know that, but let me have my moment!" I exclaimed.

I needed a moment to feel the betrayal, to suffer the grief, and to process through to forgiveness.  In prayer I felt the Lord emphasize the importance of forgiving Mom now, and I remembered that Scripture that says what is bound on earth is bound in Heaven.  As a dear friend told me this morning, ".. though it is now a dim reflection, at times barely visible at all, one glorious day your momma will sweep her arms knowingly, lovingly around her beloved Linda as the Father wraps you both in His embrace!"

I want to be ready to walk right into Mom's welcoming hug once the last vestiges of Alzheimer's and sin have fallen away and we meet our Lord in Glory. And so I forgave her, and prayed for her, and today we've had sweet fellowship together once again.

This morning I installed a nifty one touch phone, with large printed names of four family members Mom can call, both home and landlines. She now has only to lift the receiver and press one of our names so the process of dialing won't be so frustrating for her.  Giving her more options of people to call should lessen greatly the chance of her dialing 911.

I've vowed never, ever, to forget my cell phone again.  But if I do, I know the Lord will be with us just as He was yesterday when two police officers arrived at my door to inquire about the welfare of my Mom.

"Bear with each other and forgive one another if any of you has a grievance against someone. Forgive as the Lord forgave you" (Colossians 3:13).