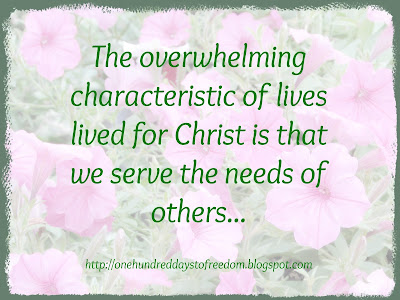 Today's post at my devotional blog, One Hundred Days to Freedom, spoke to my heart on behalf of caregivers. We are so often isolated and made to feel that our preoccupation with the needs of just one loved one is somehow inferior to more visible forms of service. And yet we serve a God who speaks of Himself as a shepherd who will seek just one lost sheep.  If you are in charge of even just one of the Lord's lambs, be encouraged. You are precious in His sight.

Find that encouraging reading by clicking the photo above (or the following link), which will take you to a post entitled Strength for Today, Bright Hope for Tomorrow.

Here is a Valentine for caregivers, who give so much, come to the end of their own strength...and then give some more. The Lord sees your sorrows. He knows how difficult it is to watch your loved ones suffer, and He knows the toll that has been taken upon your heart and spirit. He is upholding you now and has made provision for you on the road ahead.  Be encouraged, dear hearts, the Lord is with you. 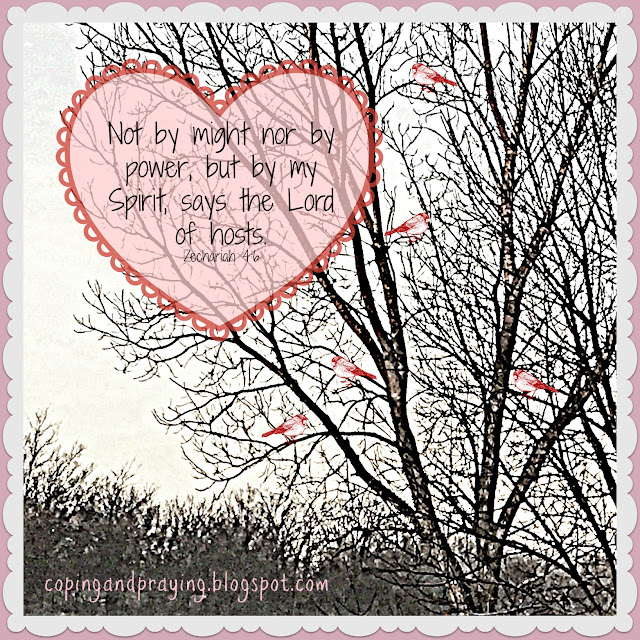 His Comforts Delight My Soul

We are enduring one of those seasons in life when grief threatens to overwhelm as sorrows and challenges attack from multiple directions.

This morning I turned my heart to praise.  I've earned that praising God as an "ought to" is not very edifying either for the Almighty or for me, and so I asked the Lord to remind me of Jesus, and to help me think about the beauty of His sacrifice for us and of the love of Father God, and to remember the abiding presence of the Holy Spirit within us.  That did it! Praise came bubbling forth, not as an "ought to" but as a response to the beauty of our Lord.

In times of grief the Lord provides comfort and sustenance if we only have the strength to lift our eyes to see, and if we will ask Him to do so, He'll even provide that needed strength!  I didn't do anything right or righteous, I only asked Him to help me to see Him more clearly.

The following Scripture has provided comfort during this time: In the multitude of my anxieties within me, Your comforts delight my soul*.  When we are sad, we may think it is somehow inappropriate to enjoy the small comforts God has allowed.  In truth, these comforts are a part of the Lord's provision for us and we should not withhold our pleasure in them or our thanksgiving to God for allowing them.

At the top of this post, I've shared some photos of the small pleasures that comforted my soul this morning.  I offer these with my love to those of you who are suffering grief of loss today, along with a prayer that you are enabled to receive the blessings of the small comforts the Lord has provided you.

During my devotion time this morning I was apologizing to the Lord for feeling so depressed.  I assumed I was exaggerating my sorrows and that the pain I feel over seeing Mom sagging in her wheelchair at the nursing home, for example, is not as severe a trial for her to endure or for me to observe as I perceive it to be.  I tend to dismiss my tears or feel that I'm being silly if I give way to depression.

As I prayed, these thoughts came:

For the most part, we underestimate both the severity of the trials we face and their impact upon our minds and bodies. The one thing that needs attention is the weight of the burden we feel whenever we do catch a glimpse of how truly grievous our injuries have been.  It isn't that we should dismiss the pain, but that we should commit it into God's hands, because our suffering belongs to Him.  When we dismiss as inconsequential the grief we've endured, we risk inflicting further injury upon ourselves.

To commit heartache into the Lord's hands is like sending something that belongs to us to a place where it can be taken care of so we don't have to think about it anymore.

It isn't a simple transaction. My pain over my mother's suffering, among other things, feels as though it is my own, almost as though it is a possession that belongs tucked away in my heart. I must make a conscious choice to release my sorrows into the hands of the One who has offered to bear it on my behalf.

1 Peter 2:25 calls Jesus "the overseer of our souls."  This is precious imagery that portrays Christ as being in charge of the welfare of our hearts.  We don't cause Him more pain by releasing our suffering to Him; when we  release our sorrows to Him we avail ourselves of His sacrifice already made at the Cross. In fact, a way we might increase our Savior's pain is to refuse to accept the payment He has given for us.

May we have grace to commit our sorrows into His hands.

“He himself bore our sins” in his body on the cross, so that we might die to sins and live for righteousness; “by his wounds you have been healed.”  For “you were like sheep going astray,” but now you have returned to the Shepherd and Overseer of your souls.
1 Peter 2:24-25