The Writing on the Wall


This has been a busy season of our lives, with my dad's funeral, two weddings, two grandkids, one retirement, and one Alzheimer patient in the mix.  We built an addition onto our house for my mom when she was diagnosed with Alzheimer's eleven years ago, and life since then has rollercoastered along with little time for the home improvement projects I used to enjoy. Our bedroom hasn't received a fresh coat of paint in probably 20 years.

Around the time of Mom's diagnosis, I began writing on the walls of our bedroom. Hey, everyone's entitled to a little bit of "crazy" when things get stressful, right?  My poor husband made no comment; he probably thought it safest to keep his own counsel.  And, home decor has never been of great concern to him; in the same way that he is able to ignore peeling paint or faded wallpaper, a few hieroglyphics on his bedroom wall did not cause him concern.

It was freeing, in a way, because everyone knows you aren't supposed to scribble on the walls; it is a lesson learned before age five.  Perhaps it began as my protest against the tide of circumstances I could not control. But to be more charitable with myself, I'm a visual learner, and having inspirational words in line of sight helped me cling to God's promises during a time that almost everything else was unraveling.

In the weeks before the wedding of my son--that promised boy, youngest child, now grown into a Godly young man--I recorded a Scripture a day in three neat columns on the wall facing the bed.  Steadied by these promises, room was made in my heart for a beautiful daughter-in-love, and my happiness was untainted by that painful-for-the-bearer and annoying-for-everyone-else mommy grief that sometimes robs joy. 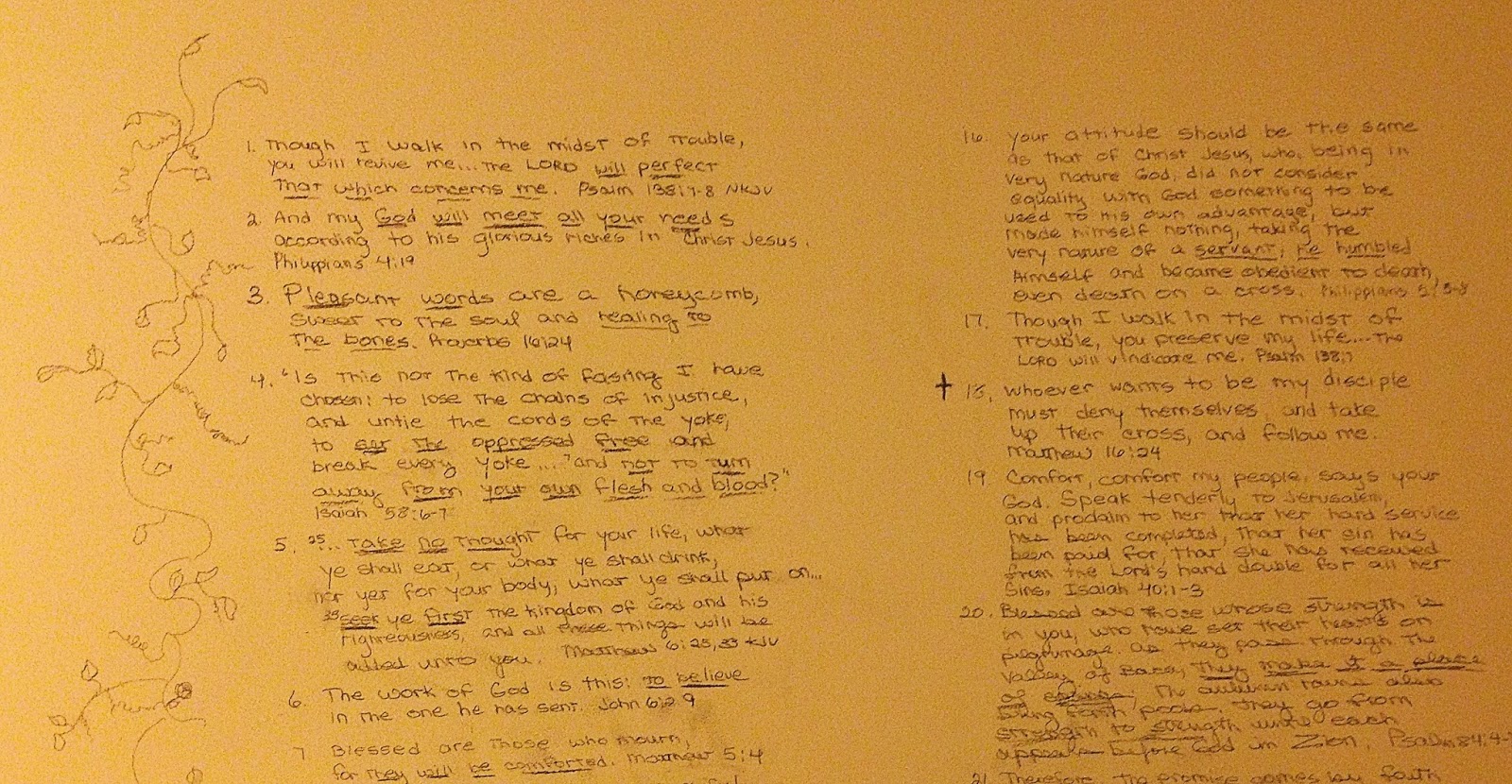 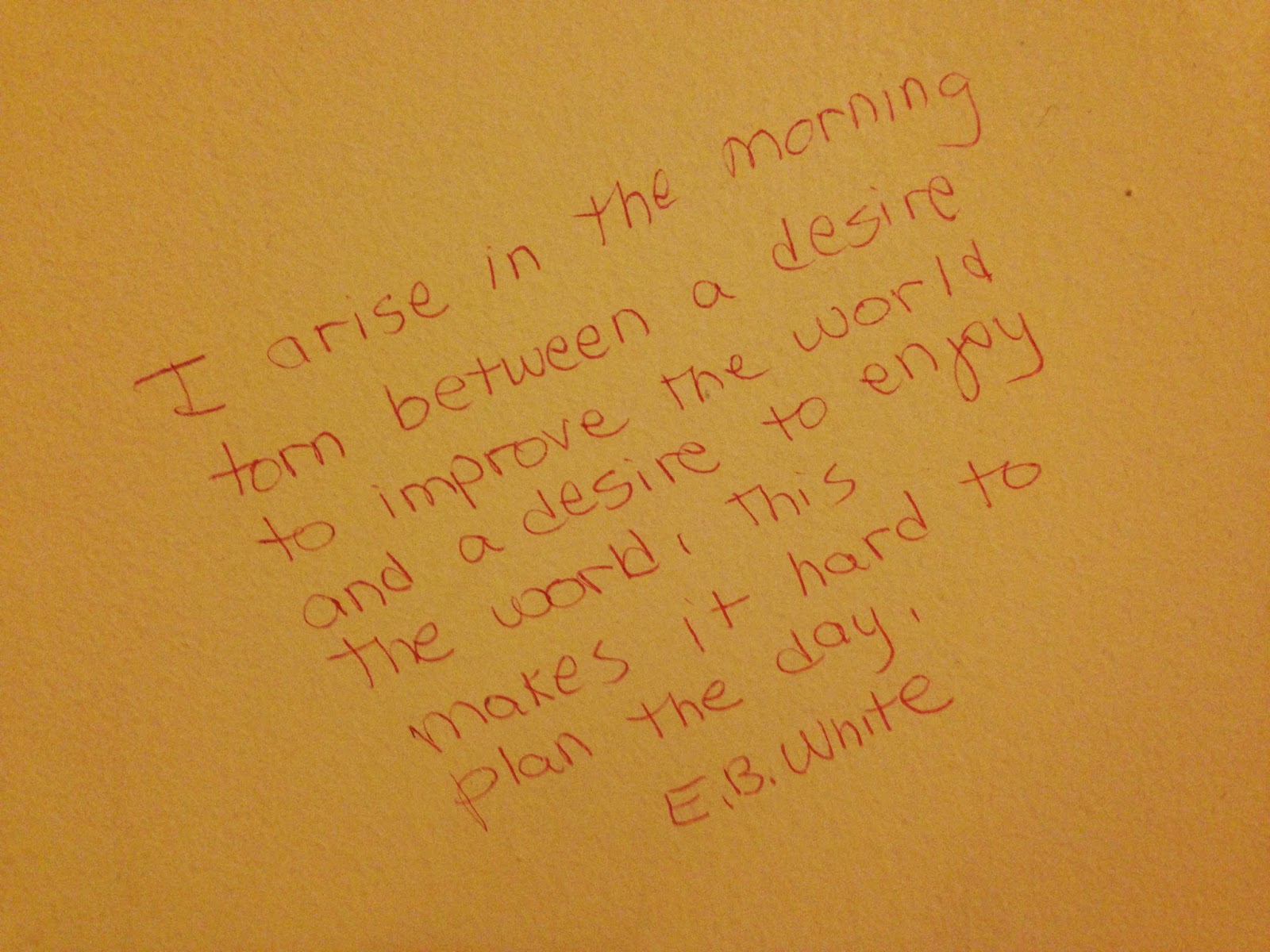 One afternoon I sat on the floor between the dresser and the nightstand, and used my colored pencils to inscribe my life verse low on the wall where I would see it during afternoon rest times necessitated by the aching joints and exhaustion of an ailment that's never been diagnosed, but has caused me discomfort nonetheless.

At this writing the ceiling's been redone, and I've spent the afternoon patching nail holes and putting a coat of primer over each of my scribbles.  Oddly, I don't feel much remorse over covering the  verses and sayings that sustained me during this demanding season of life.  Maybe that's because they are written on my mind and heart, but it is also because I am ready for a new song.  At last I am able to grieve the loss of the mom I once had without the kind of overwhelming grief that is so painful-for-the-bearer and annoying-for-everybody else. I'm able to grieve as those who have hope (1 Thessalonians 4:13).

My newly painted bedroom will have just one saying on the wall, and that won't be in my own handwriting. I've bought a prepackaged "painted look" decal that says "Pray in everything, worry about nothing."  It's decorative and tasteful.  Not at all odd, like the scribbled walls I'm covering in a shade of subdued almost-blue.

But on second thought, I might break out my colored pencils one last time.  Back behind the nightstand on my side of the bed, where no one will notice but me, I could inscribe these words from George Herbert:

And now in age I bud again
After so many deaths, I live, and write
I once more smell the dew and rain,
And relish versing. Oh, my only light,
It cannot be
That I am he
On whom thy tempests fell all night.
(entire poem available here)...