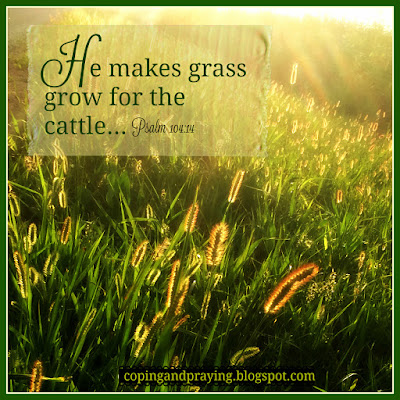 I used to read a Russian folktale to my first grade students in which the main character says repeatedly, "God will provide."  In the face of hopeless circumstances, when there is no food on the table much less food to share, Tante Golda refuses to give up her plan to carry through with her traditional potato latke party, even though she has no potatoes at all.  If you love children's books and stories about miracles (along with a really good recipe for latkes) this book can still be found from third party sellers at Amazon, here:  Miracle of the Potato Latkes, by Malka Penn.

During this summer's drought in Kansas, I've thought about Tante Golda and her confidence that the Lord would provide for her needs.  I've clung to the certainty that God, who did not withhold His only Son as the provision for our greatest need of all, would not fail to provide for us whether fields provide grass or ponds continue to provide water for our cattle...or not.

During our 45 years on this farm there have been years when we had complete crop failures, the most notable being the year our daughter was born, when the corn crop failed so badly that we walked through a field carrying laundry baskets and picked up dried nubbins of corn from the ground to feed to the pigs we raised back then.  That was 1980.  It did not rain that summer, but in the fall we received a bountiful gift nonetheless: our sweet little girl.  And God did provide for our material needs as well.

But this year, it has finally rained. And miraculously, during the driest July in recent memory, we received perfectly timed, tiny rains that were just enough to keep our soybeans alive, if not thriving. And then, at the beginning of this week, we received a glorious, soaking rain that has caused green to return to lawns and pastures (I think of Tante Golda's one potato that somehow multiplied to many). A pond that we had feared would go dry has received enough runoff to keep us from having to haul water to cattle.

Whether through years of disease, as my mother has faced since her Alzheimer's diagnosis in 2004, or seasons of plenty, God does provide for our needs. I've found this to be so time and again, in good times and bad. Blessed be His Name!
Posted by Linda Born at 8:07 AM