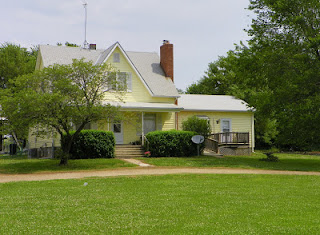 I live in a 100 year old farmhouse.
The basement was once a coal cellar, and it leaks.  I'm married to a farmer, and those of you who understand what that means will know that home repairs tend to rank low on the list of priorities while available cash flow is directed to putting a crop into the ground.

The woodwork in several rooms of my home sports a 1980's orange tinge, some of the sheetrock has cracked because of settling during drought years, and the kitchen, which was last remodeled 20 years or so ago, sports a wallpaper border.  That border has become the focus of a lot of my angst lately.  Our ceilings are 9 feet high and I'm not as secure at the top of a stepladder as I used to be.  I have taken to staring at that border with a feeling of helpless resentment; I have so many friends who live in newly remodeled homes. Their woodwork is white, their walls are gray, their furniture is not floral.

I made plans to mount a cautious ascent to the top rung of the big stepladder, and peel that wallpaper border down.

I hadn't mentioned this plan to my grandchildren, but what happened next makes me wonder whether they somehow caught wind of change in the air, because just a few days after my decision to remove the border, my youngest grandson looked up at it and said, "Grammy, I really like those apples up there."

I was stricken with guilt.  Here I was poised to tamper with a portion of his childhood memories: to trespass on the sanctity of "Grammy's house."  I'm embarrassed to admit that I didn't let this sweet child's fondness for my decor belay my plans. "He's three years old," I thought.  "He's resilient.  He'll get over it."

A week or so later, I invited my middle grandson, age 6, out for a play date.  We had a wonderful time.  He was sitting in the same chair his little brother had occupied a few days earlier, and we made  cinnamon rolls together.  Incredibly, he sat back in the chair, raised his eyes to the spot where ceiling meets wall, and said, "I just love those apples, Grammy."  He paused thoughtfully, and added, "...and those chickens."  The two metal chickens that grace the top cupboard of the north wall of my kitchen had also suffered my baleful stares, and are at risk of the same fate that threatens the wallpaper border.  How did those two little boys know exactly how to make their grandmother pause in her rampant plans to bring unwelcome change to a beloved portion of their lives: Grammy's kitchen.

Perhaps my three grandsons had discussed this matter among themselves, or maybe the Lord is just trying to get through to me, because when my oldest grandson, age 11, was here just last week he too mentioned how much he likes my kitchen.  I said resignedly, "I suppose you like the wallpaper border."

And he looked at me very seriously and said, "I do Grammy, I really do."

I finally prayed about my discontent with the sweet home the Lord has provided me, and in response, memories of my own grandmother's house came to mind.  My grandparents lived in a home that had begun as a one room log cabin. Grandpa added a second floor, built a room that connected the main house to the tiny cabin he'd built for his own mother, and added a final addition that he called "the utility room."  If you dropped a marble on the floor in Grandma and Grandpa's bedroom, it rolled with increasing speed, to the opposite wall. Their kitchen was small, and I adored it from the white enameled corner cupboard to the tiny window over the sink that offered a closeup view of the propane tank outside.  In lieu of a door, the entry off the kitchen to Grandma and Grandpa's room sported a length of patterned fabric stretched on a string across the top of the doorway.  The ceilings were just seven feet high.

I loved my grandparents' house and love the memory of it still. It never occurred to me to critique it based on whether the appliances were new (they were not) or the furnishings up to date (definitely not).  With the perspective that comes with adulthood I recognize that Grandma and Grandpa were what we would now call "poor," but I don't think any of us knew it or cared.  There was love there, and blessed familiarity: arms that stretched wide to welcome us when we visited, and my grandma's tear-filled eyes when we drove away.  Beloved, beautiful memories that have nothing to do with the quality of material things.

I will confess that the apples that rim my cheery farm kitchen are still not safe from my urge to renovate and remodel, but my discontent has evaporated.  I am the blessed proprietor of "Grammy's house," and I wouldn't trade that role for all the shiplap in all the beautifully renovated farmhouses in the world.


"...be content with what you have, because God has said, “Never will I leave you; never will I forsake you.”
Hebrews 13:5 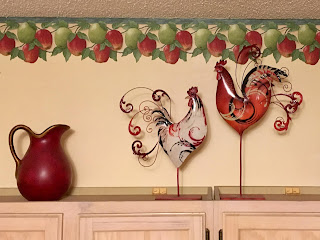