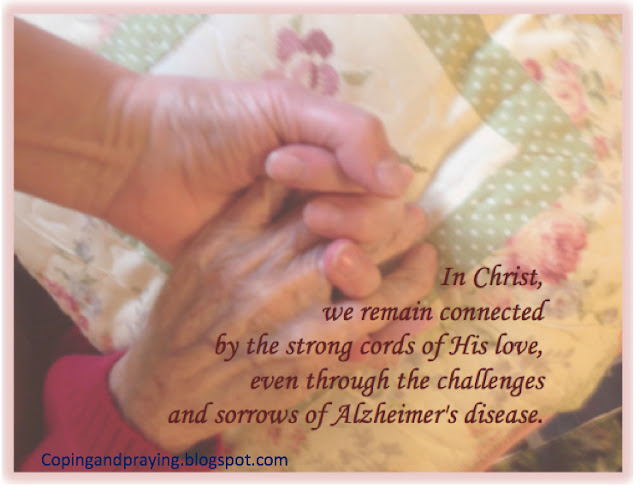 I wrote the following article some years ago and have just admonished my daughter to reread it if I ever begin to exhibit signs of dementia!  No matter how well-versed we are in the do's and don'ts of caregiving, we nevertheless tend to respond to aging parents according to the dictates of past relationship roles...

On Easter morning, 2004, I slid into my customary pew at church with several minutes to spare before services were scheduled to begin.  I noticed that my mother’s space at the end of the row was empty, and felt a glimmer of worry. She was a stickler for punctuality and never missed church.  She taught me always to arrive early, especially for holiday services.

I excused myself and called Mom.  “Oh, I just decided to stay home today,” she said. When I reacted with shock, she complied with my wishes and came to church, arriving twenty minutes late.  This incident was one of many that let me know something was wrong with my mom.

Apathy is a common side effect of dementia, and is sometimes the first symptom noted.  Dementia patients may display indifference regarding schedules in combination with an apparent lack of emotion toward concerned loved ones who object to their behaviors.  Symptoms of apathy probably cause more conflict between caregivers and patients than any other early warning sign of dementia. A caregiver may have an intellectual understanding that the care recipient should not be held accountable for disease related responses, but it is difficult to transfer that “in the head” understanding to the heart.  The tendency is to react to the loved one based on the relationship that existed before dementia occurred rather than to respond from a caregiver’s perspective.

Apathy may be a result of the physical damage that occurs as the characteristic plaques and tangles of Alzheimer’s disease wreak havoc in the brain, but there is a psychological and emotional basis as well.  Forgetfulness and confusion cause dementia patients to lose confidence in the ability to successfully perform everyday tasks.  Repeated failures can result in a reluctance to make the effort to try.  People who suffer dementia often ask others to carry out tasks they are still physically able to complete, a behavior that in the general population might be labeled lazy or self-centered.  However, for the dementia patient, requesting help is actually a viable coping mechanism that helps to compensate for failing memory.

When I respond to my mother’s requests with irritation, I take from her the dignity of retaining a measure of control over her environment.   She has learned a new way to get what she needs—she asks!

It is only in recent years that Alzheimer’s disease has been widely recognized and diagnosed.  There are doubtless a number of readers who remember a parent or grandparent becoming stubborn or demanding, and only in retrospect have understood that Grandpa’s “hardening of the arteries” and Grandma’s stubborn streak were dementia related.   It is my hope that our current, more accurate understanding of the physical basis for the behavioral changes of dementia will ease the sad memories some of us have of the puzzling or hurtful behaviors a loved one exhibited toward the end of life. When my own mother goes home to be with the Lord, I pray to remember her as the vital and loving person she was before dementia robbed her of the ability to think clearly and respond appropriately.

This article first appeared in the November, 2010 issue of The Lebo Light, which was a much-loved local newsletter that was the brainchild of Lennis McCreary, its editor.  Lennis has gone home to be with the Lord now, and I know that The Light is one of many stars in her crown.