June 7 He Sees Us Through 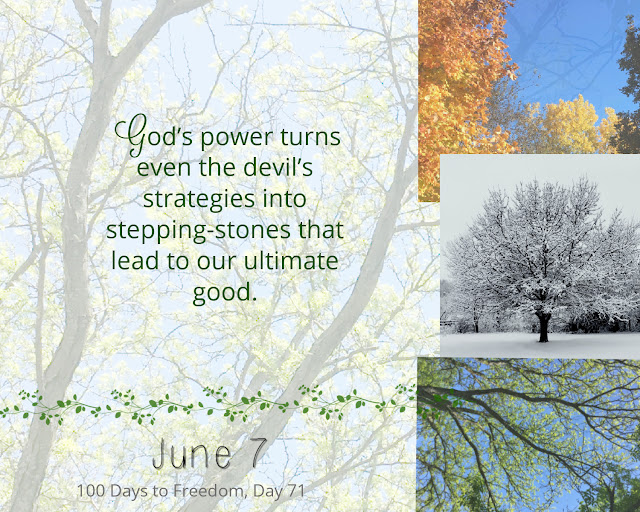 You intended to harm me, but God intended it for good to accomplish what is now being done, the saving of many lives.

The Scripture above is from the story of Joseph, who was sold into slavery but was then prospered by the Lord to rise to a position of leadership in Egypt so that God's people would have grain during famine.

I was thinking about this verse today and, in prayer, said, "I've not had suffering in my life such as Joseph's..." but then I thought about having been an Alzheimer's caregiver for 16 years.

There were unexpected seasons of peace during Mom's illness, but there was also suffering. Because of her disease, my mother turned against me during her final years and although to the very end she continued to express love, those expressions alternated with vitriolic anger.  Responsibility for her was a constant weight on my heart whether I was providing her daily care or not.

That I did not at first think of caregiving as a signpost marking suffering in my life is due to God's provision for me during those years. When the enemy hurts us, we can depend on the Lord to help us.  He will make it right, more than that, He will bless us exceedingly, abundantly more than we could ask or imagine (Ephesians 3:20).  He brought me blessings in spite of Mom's illness, and in some ways even because of it.

I have been able to help other people through what Mom and I endured during the years she suffered dementia. This blesses my heart. And in a way that only the Lord could orchestrate, the labor of writing about our struggles forced me to analyze and express the specific ways God supplied our need.  Repeating stories of God's goodness to us imprinted these incidents on my mind and heart. My own faith was edified as I worked to comfort others who were facing similar struggles to ours: blessing upon blessing.

Once tragedy strikes--and Alzheimer's disease is a tragedy--there is no escaping its impact.  For me, the title of caregiver was bestowed by default and not through some noble or even obedient-to-the-Lord choice; there wasn't anyone else.  I always think of Pippin's words in one of the Lord of the Rings movies: "I don't want to be in a battle. But waiting on the edge of one I can't escape is worse."

Alzheimer's disease is a battle indeed, but we serve a God who has gone ahead of us and has already won the victory.  In every event of our lives, the Lord has plotted a course through the challenges we will face. His love cushions every blow, and His enabling power sees us through.